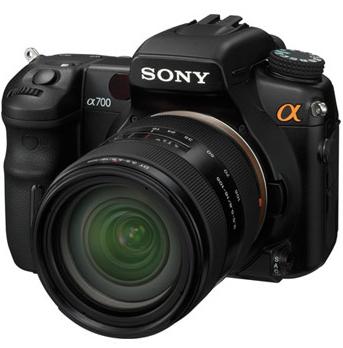 Finally, the rumours about the name of the new digital reflex camera from Sony were not based on reality (at least concerning the name of the animal). Today, Sony announces its new leading product under the Sony Alpha 700 or Sony A-700 label. Obviously, this is coming back to the naming conventions of Minolta where the figure 7 was associated to the high-end products (9 was for fully pro and 3 and 5 for amateur).

Nevertheless, the general indications of technical characteristics where rahter precise. I let you be the judge. Here are the final/official specs:

You will notice that, contrary to what many other digital SLR recently announced, there is no LiveView option. It’s not that I think it is very important (I believe that it is mostly useless), but there is a notable difference when you compare to the current wave of SLR launches.

All this puts the Alpha 700 in the same class as the old Konica Minolta Dynax 7D which it should naturally replace and in the competition against the other cameras at more than $1000/1000â‚¬ that were launched or announced by Nikon, Canon, Panasonic, Olympus, etc. However, the price is not officialized yet while the availability is set to mid-October.