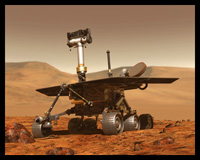 Sometimes, science goes hand-in-hand with the most romantic story. This is the case of the two Mars rovers sent by NASA to the red planet. Their mission has been extended and extended while they strived well beyond their official life expectancy. Nowadays, they are out of a large dust storm that had all scientists worried. Nearly completely out of sun light for days, they feared it would be the end of their life.

But the two sturdy little metal beings are awake again after months of sleep (to reduce power consumption to the lowest and most secure level possible). Both Opportunity and Spirit are ready to start again!