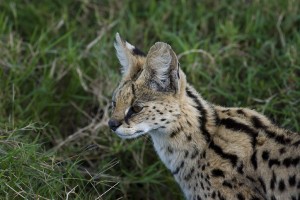 Encounter with a wild cat in Kenya

I have been publishing some photos from my travel to Kenya last October, but it became apparent to me that I had forgotten to present the photos I took during a short encounter with a serval (Leptailurus serval, previously Felis serval, pronounced /ˈsɜrvəl/) which is a relatively large-size African wild cat. Amazingly beautiful, it is quite difficult to observe by day. Actually, it’s Alain Pons (our guide and famous wildlife photographer) who called “Stop!” after seeing a pair of ears just a couple of inches above the grass of the Masai Mara. Even, after braking hard, it took us some time to find it again.

On the last picture, you can notice the black and white pattern of the back of the serval ears. They are considered as a beacon to help kittens follow their mother, giving them very visible indicators that stay invisible from the point of view of their preys.