Io, a Jupiter satellite, has long been the only place -out of good old Earth- where presently active volcanoes could be observed presently. It fascinated me even when the satellite was joined by other bodies in the Solar system.

Today NASA confirms us that Io is still the best place where you should go and spend your vacations if you want to go volcano-watching (or volcano-photographing) on live ones. And you will see pretty impressive ones, too.

The most recent tourist there returned a really amazing image. 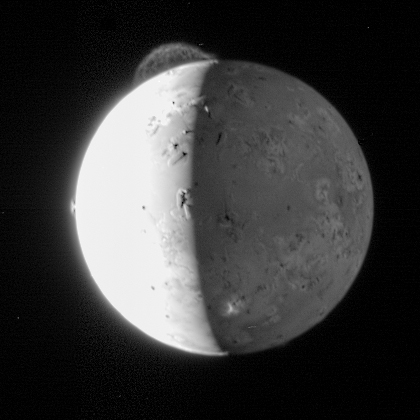 LORRI (Long Range Reconnaissance Imager) is an on-board photo camera installed in the New Horizons mission en route for Pluto that just cruised past Jupiter. It took advantage of the short time there to snapshot a few landscape photos. On one of them, Io shows nothing less than three volcanos simultaneously active. The one seen at the top (near the pole) blows a plume culminating at an altitude of about 180 miles.

However, be sure to check with your travel agent, the cost of the missiontravel may be counted in millions of dollars. And tell your boss that you will be out of the office for a few years rather than the usual one week leave for a more common tropical island vacations on Earth.