When you look into the largest images accessible from the Internet, you MUST check Google maps and Google Earth (the application that allows you to navigate on the surface of the Earth globe from your desktop with the satellite images collected by Digital Globe and Google). 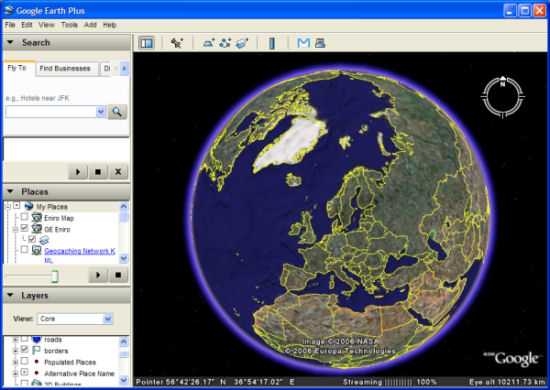 From its inception, Google Earth provided images of the Earth globe at a resolution of 15m/pixel (each pixel is a square of 15 meter by 15 meter). But from 23rd of March 2006, 20% of the emerged land mass (about 1/3 of the world population) is now covered by exclusive photos in the amazing rÃ©solution of 70cm/p (sometimes even down to 10cm/p, enough to recognize the plane model on an airport and to distinguish people in a house garden).

It will be difficult to make it bigger but Google is already working at it since the systematic movie to 0.7m/p for continental masses would lead to about 5 times this volume, and surfaces covered at 0.1m/p will simply blow the total up when it is no longer applied to isolated test examples (like the current example in part of Las Vegas city).

Let’s be clear and simple, the main limit will soon be (for Google): How to keep such a big amount of data accessible knowing that there is a constraint on access times (tens of thousands of simultaneous accesses from all over the world cannot be served by a mere big disk drive on the corner of a desk and keeping it up-to-date is not only a matter of cut’n paste anymore).