To start with Easy Penny, the most reasonable PC, the integration of a graphics card inside the motherboard leaves the cost perfectly well managed. Added cost: 0â‚¬.

Eactly on the opposite, to play with PC video games, Gran Turismo requires a graphics card up to the level expected by most game designers of today (and of the near future). For this, I chose to look at cards able to support DirectX 10 (even though there is still no title adapted to this standard) and the eyes fall automatically on nVidia. The current offering from AMD-ATI (now only the Radeon HD 2900 XT) is obviously not mature enough and eats a electricity like if there was no end to oil reserves; This is not good for long-term reliability, cooling fans noise and overclocking capability (for the most adventurous ones). 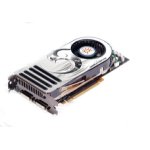 As nVidia organized strictly the manufacturing of the boards of its partners, nearly all of them look identical (except for the color). The add-ins are the only real difference in the box. But since we wanted to go for a bargain price (if you need some games, look for the bundles), we went to a Sparkle SF-PX88GTS640.