by Yves Roumazeilles on September 7, 2008

Chasseur d’Image recently told us all that the Nikon D800 was not only a rumour. But what is really this bizarre photo camera (bizare because still unknown)? The question is there to be answered and it’s a difficult task. But, let’s see what we can infer from the little data available.

According to the numbering scheme, it would not be the direct successor of the Nikon D3 (totally pro). On the contrary, coming behind the Nikon D700, and much too early to be its replacement, in the semi-pro range, this must be a better camera. 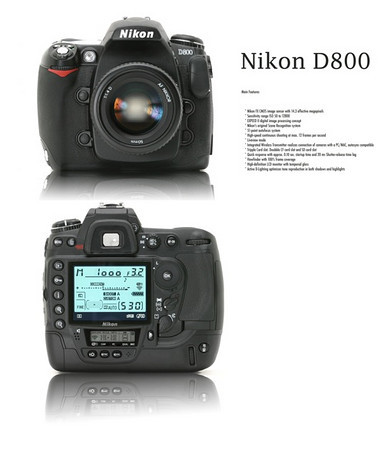 Furtheremore, it appears that the Nikon D700 has a camera body which is not fully exploited: The memory card location seems pre-cut for an additional and smaller Flash card (SD model, probably). It seriously leads us toward the high-end cameras using two cards simultaneously to write both the RAW files on one card and JPEG files on the other. This would clearly be a feature for a high-end camera, but without being enough to create a separate model.

Hwever, Nikon became the specialist of re-use, re-cycle and modularity of its SLR cameras. They ensure that as many parts as possible are common to two different cameras. So, I would believe that…

I wonder whether the Nikon D800 (let’s use this name for the time being) would not be the real user of the Sony Full Frame 24.6 mega-pixel sensor that has been promised to us. Can you imagine it? A semi-pro Full Frame range at Nikon with a D700 of 12.1 MP and a Nikon D800 of 24.6 MP. Nikon would only have to add a high-end pro successor to the Nikon D3 in January of February 2009 and, here comes the best-looking range of digital cameras for enthusiast photographers.

Nikon would have no real dififcult to succeed here. At least, they already have everything for it.