As the PC I use to run BitComet is rather old (it’s still running under Windows 98) it is easy to believe that this configuration is a good basis that will work on any small machine and old configuration for BitTorrent.

Of course, it would also work very well on a bigger machine or on a fuller Operating System like Windows XP. So, everybody should be able to make use of this information. 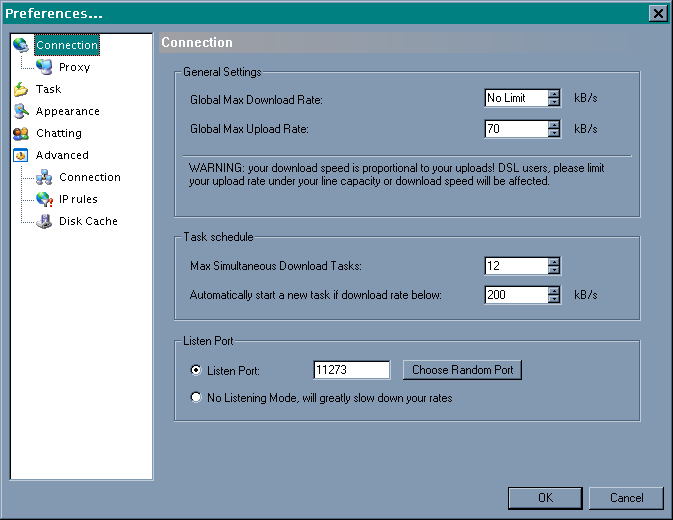 I don’t try to limit download, but I stop the maximum upload a little under my maximum ADSL upload rate. It gives me great comfort in order to keep navigating and reading/sending email while BitComet is running. 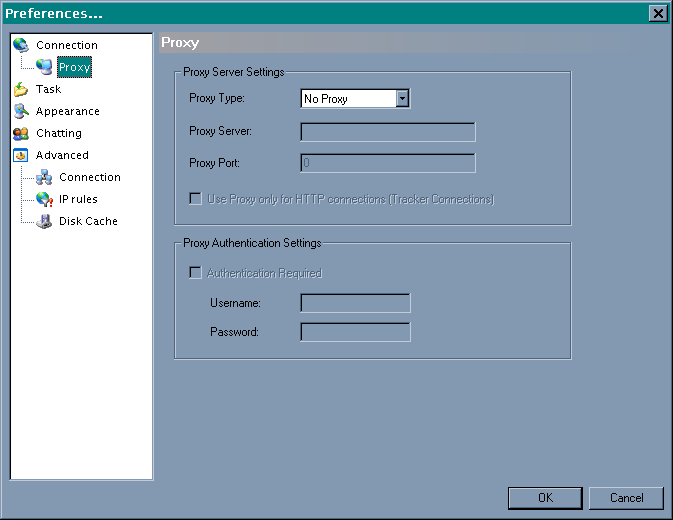 I don’t use any proxy.

I chose to use a separate directory to store my downloads.

Allocating files before downloading is a simple way to avoid waiting to discover that there not enough space on the hard disk (usually you get a message within a few seconds of starting the torrent).

At the end of the download I strongly recommend to check for the “Hash”. Sometimes, it will detect a little download incident and BitComet will silently and immediately re-download the wrong part. It may come from a crashed PC or some other reason, but there should be no reason to avoid having the best file you could expect.

The upload task stops nearly immediately after it reached a balanced situation (uploading as much as downloading). It is just fair and it gives maximum bandwidth to the other tasks. Anyway, it is quite easy to start uploading again a little later by manually requesting it.

While uploading, I try to favor a little the fast peers (min 3 KB/s) because my PC runs under Windows 98 and does not handle very well the hundreds of connections that a Linux box or a WinXP, Win7 or Win10 machine could accept. 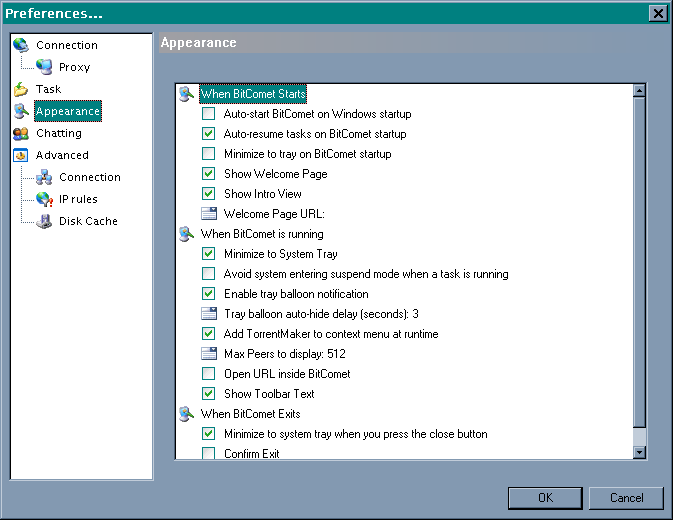 No comment needed. It is only a matter of personal comfort. Very subjective and with no known optimization impact. 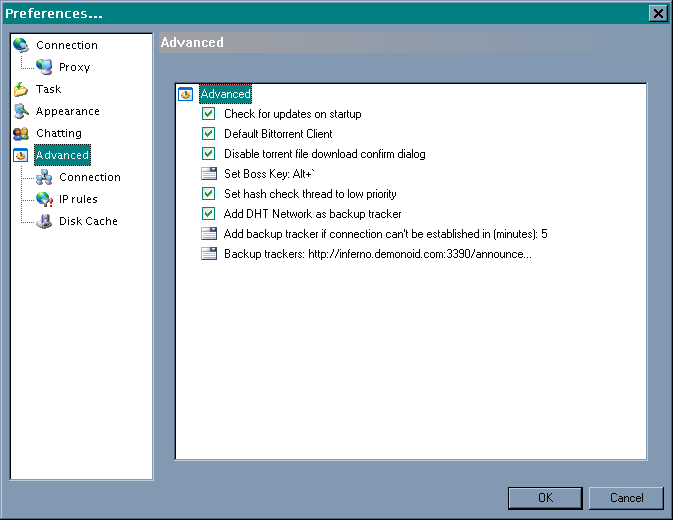 The only useful remarks are concerning the choice to minimize the “hash check” load (there is no urgency to compute the “hash” after hours of download for a DVD-ROM image or a GNU/Linux distrib.

But, the choice of adding the “DHT Network” (4th option) is a critical one to ensure that you will always find a maximum of peers to help you. If you are downloading files with a small community of peers, it may be the only way to get through. If the download lost its tracker site, there is no other way to keep downloading. Apparently, the list of backup trackers is mostly useless (but harmless too): Most torrents are present on one tracker only – except the DHT Network. 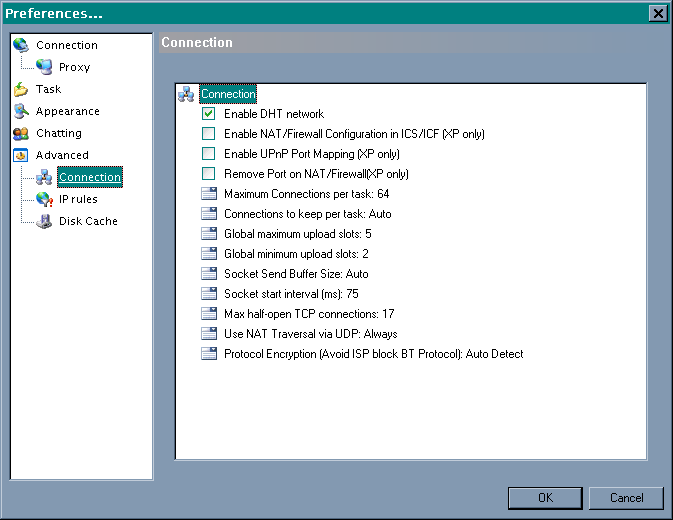 Here, I authorize the “DHT Network” in order to ease the most difficult downloads.

The following options being specific to Windows XP, I am not concerned. For the rest, the options are selected according to my choice of limiting load on my poor old Win98 PC. This is slightly slowing down the performance of BitComet (if you have a Windows XP PC, I would advise to keep the default options, though). 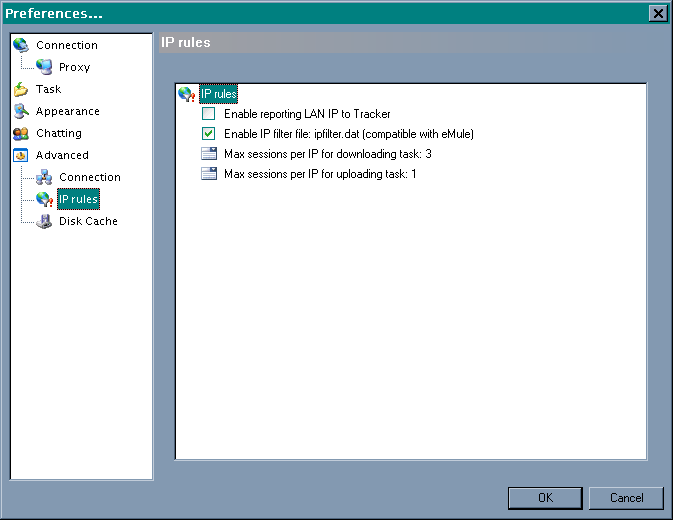 Here again, a small restriction to the total number of connections/sessions is order to protect my Windows 98. The default options are obviously good for Windows XP. 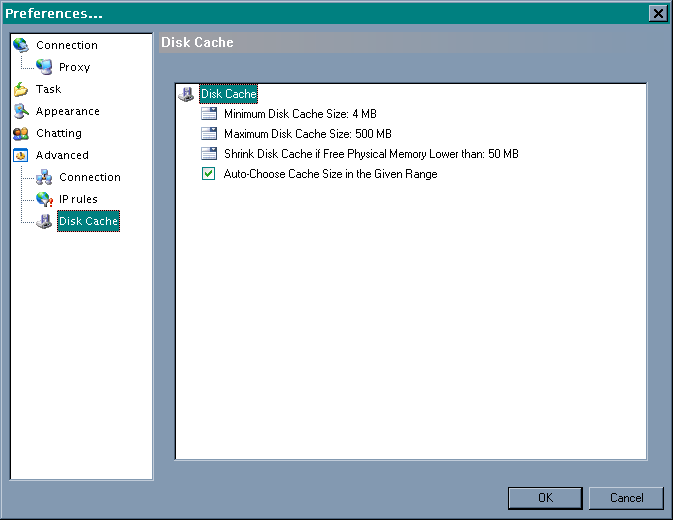 The size of the hard disc cache may be important. It varies according to the conditions of use, but it is important to keep a maximum value as high as possible to protect your HDD against too many small data accesses that would strain it too much and limit its lifetime expectancy. No limit here, then let BitComet choose how to use the space you gave it to working into.

Notes about SSD: While a HDD may want to be speed-optimized, thisis not the case for a SSD. However, reducing the wear and tear is a fairly good objective too. Even if today’s SSDs are more sturdy than in the past.

Then, you’re ready to rock the BitTorrent world. You can share your own experience below by leaving a comment/reply to this post.

If you want, you can stop by the rest of the web site to get some news interesting the wider P2P world.