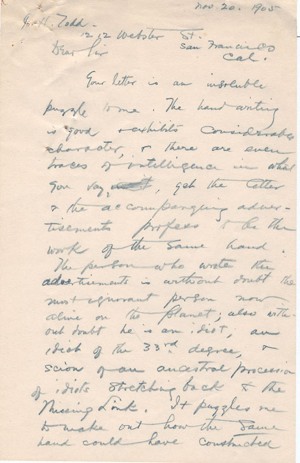 For example, the only known video showing Mark Twain (Samuel Clemens) at home with his two daughters Clara and Jean:

But a brilliant writer like Mark Twain is worth more than a bad quality old movie. Far from being an actor, he was a writer and, thus, was able to delightfully write about anything at any time. For example, when he addresses a a snake oil peddler: “You, sir, are the scion of an ancestral procession of idiots stretching back to the Missing Link”.

I would love to be able to apply this myself to one of the modern spammers.

But Mark Twain was also man of a wider judgment: “Of all the creatures that were made, man is the most detestable… The only one, the solitary one, that possesses malice… He is the only creature that has a nasty mind.” Mark Twain