This is a great classic movie from Robert Wiene (Germany, 1920). Even if the plot unfolds a bit more slowly than most today’s horror films, even if the quality of the image pales compared to 21st century blockbusters and their budgets, the movie is leaving a significant trace in the viewer’s mind. For sure, the make-ups and the studio sets are extraordinarily modern to the point that they are setting a style by themselves. 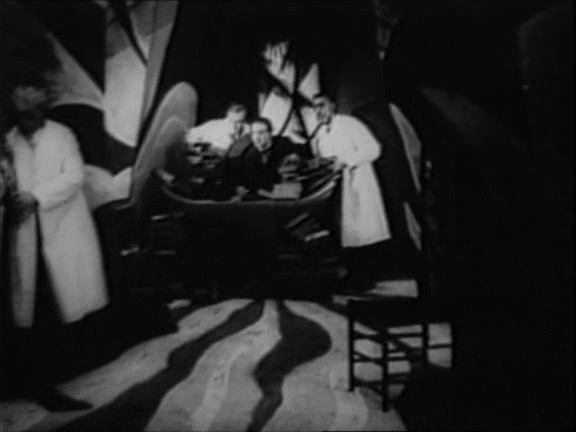 On the screen dump above, we can have a view of the Dr Caligari’s office where the studio set is most visible with its slanted walls and furniture, the black and white curly paints on the floor.

Remembering that the movie was filmed in Black and White, in 1920, the overall effect is totally surprising and the movie goes right into the realm of surrealism. I don’t know if it was a success when it hit the theaters, but this a major part of cinema history that is made available thanks to the Internet Archive.

The vilain’s face (and make-up) makes him the immediate target for our suspicions. The young heroin is definitely of the pale type that the 20’s favored so much. Despite that, we are gripped by a story which mixes mystery, love, horror, crime, hope and science. 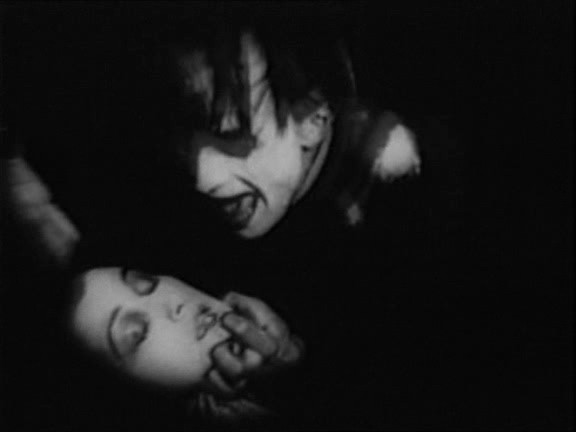 A man named Francis relates a story about his best friend Alan and his fiancÃ©e Jane. Alan takes him to a fair where they meet Dr. Caligari, who exhibits a somnambulist, Cesare, that can predict the future. When Alan asks how long he has to live, Cesare says he has until dawn. The prophecy comes to pass, as Alan is murdered, and Cesare is a prime suspect. Cesare creeps into Jane’s bedroom and abducts her, running from the townspeople and finally dying of exhaustion. Meanwhile, the police discover a dummy in Cesare’s cabinet, while Caligari flees. Francis tracks Caligari to a mental asylum. He is the director! Or is he?

2 Replies to “Free Movie: The cabinet of Dr Caligari”