by Yves Roumazeilles on November 9, 2009

Back from a few days of photo trip to Nepal, I feel it is time to share with you some of this astonishing experience organized by Amawanda and guided by Alain Pons.

I am more or less a wildlife photographer attracted to the African wide-open spaces. But I had been attracted mostly by the presence of a seasoned pro photographer (Alain Pons) assisted by a very serious organization (I had been able to appreciate them in a previous trip to Kenya in 2008). I had also noticed that costs were relatively moderate (taking into account that this is a wildlife trip – which is often very expensive) including -we could check this later on location- a significant share reserved for local actions for development and nature protection in full coordination with the local structures and the local wildlife organizations.

A summary of the program:

The flight to Kathmandu was without surprise on Qatar, despite the long night stop in Doha airport where the only Duty Free shop cannot be considered as a commendable tourist spot (but they have a nice stock of alcohol or cigarettes for those who prefer to prepare themselves for later needs).

The Kathmandu-Bardia journey requires about 20 hours of bus or car. The stops provided in the program are a good way to break the inevitable monotony. A faster plane journey would be possible (it is included on the way back) but it would be a pity to avoid the view in the valleys and from the mountain roads out of Pokhara.

All along this journey, I will try to make a few recommendations about what a photographer might find more interesting to stop for.

Take a flight from the Nepal capital city to the Everest and shoot a panoramic view of the mountain range from the cabin window (beware of color correction). More advice in my article about plane photo.

You should try the visit of the old city but instead of the going from temple to temple or shooting all shades of colors, stop to collect images of the many handicraft shops open on the streets (metal work, barber, potter, cloth and dressmaker, etc.)

The Annapurna range panorama from Sarangkot (an elevated viewpoint at 1600m), if the weather is clear, but you must arrive well before the sun rise to avoid traffic jams (yes, really).

The Lakeside/Baidam street (near Phewa Lake) could be considered a honey pot for tourists where price negotiation must be mastered but some other active streets could attract your attention, and even the lake shore offers some interesting perspectives at the end of the day.

The road to the South is marvelous in the morning light. You will be able to find paddy fields and various scenes of the daily life in step with the seasons. Then, crossing the deep valleys of the Tinaau and the Adhikhola will offer you vertiginous perspectives (if you do not travel through them too early or too late, light having some hard time diving so deep).

If you want to spend some time among the temples of this renowned Buddhist pilgrimage, don’t wait. But be prepared for the most colorful experience. It may be interesting, but you’d rather spend some time playing with the loungtas (lungtas) or « wind horses », those prayer flags floating in the wind and the light.

The Sarus cranes which make some of the city’s wildlife fame are difficult to approach out of the “international” temple, where they are domesticated, is still being built and is not open to the general public [Ed. written in 2009]. The digiscoper will feel more at ease with her very long focal lens.

The road with their heavy traffic could also be a reason to stop and collect pictures of the joyful and colorful displays of the many vehicles (bus, trucks and even some cars or taxis). 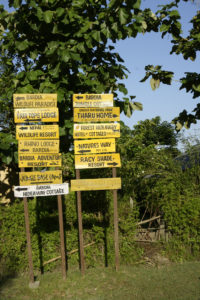 You must not miss the Friday market in Thakurdwara and the farms all around host very poor people but men and women smiling and welcoming: Everybody will return your hello ( “Namaste !” in Nepalese), sometimes with a “Bye bye!” often resounding with fun but always pleasant. 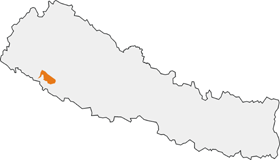 Rafting down the Karnali river is done without even thinking about it (a few splashes at most) and allows to go near the animals from a different side. This is particularly true for the birds if you are not too far from the shores (to be discussed in advance for an easier journey). The stops for safari walks a few yards from the river break the monotony (think about 2 days to go from the Chisapani bridge back to Thakurdwara, along the full width of the Bardia National Park).

Notice: If you use the services of the Racy Shade Resort or of Christophe Bouchoux, the surprise at the mid-journey camp in Gola will long stay in your memory as a great time.

On the opposite, the safari on elephant back is not easy to recommend to photographers: If more than 2 people share an elephant, the photographers have a hard time (don’t count on more than 200mm or 300mm focal length to compensate for the very limited stability of the animal and the uselessness of a monopod; A wide-angle lens or a 50mm could also serve for landscape shots, but switching lenses is very perilous: Take a second camera well strapped around your neck). Nevertheless, the elephant will go where no road vehicle can even dream of driving into.

I only tried one lodge, the Racy Shade Resort booked by Amawanda for this safari, among the dozen offered on location. It is very correct even if the warm water is only available upon request by the tub. But the beds are very hard and will only attract the most tired customers. The others will try not to move too much during the night…

However, comparing with all other countries, it is quite unusual to find a local guide organization as well integrated into the local life and as directly involved in the common development of the park and the local community. This is exceptionnaly perceptible as a large part of the revenues is used in local actions for a coordinated development of the National Park and the surrounding villages. This is so unusual that it must be commended. Everything tells me that it is not only a marketing move but a a daily priority for the whole team.

Inside the Racy Shade Resort, birds and butterflies are very present because of the trees, the flowers of the central patio and the rice paddies all around: woodpeckers, peaks, drongos, tits, etc. The digiscoping photographers will find find pleasure without traveling further but also can cross the little river in front of the resort to enter the Community Forest. I would recommend to keep a camera handy to easily satisfy a few simple pleasures. I will publish here some of my images in the coming days. 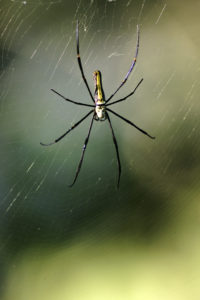 The low point of this photo travel has been the near total lack of wildlife during the “safari” tours. I did not see more exotic animals than in most West European forests. But the weather conditions of 2009 (a very long monsoon followed by dramatic storms) had pushed all animals under cover and even deeply transformed the topology (shores pushed by the violence of the bulging rivers) to a point where wildlife observations were rendered improbable despite the best efforts of the guides. So, we learned that the best time period would have rather been March-April to take advantage of dryer conditions susceptible to push animals back to the rivers. For what I could observe, the recent rain storms were a real roadblock for the wildlife lover and photographer.

On the contrary, the innumerable animal footsteps we saw on the ground confirm the original density of the local wildlife population… So, be prepared to shoot less shy animals: Spiders maybe, dragonflies for sure (Waiting for one-horned rhinoceros at a lake side, you can easily shoot dragonflies and damselflies – macro-photography with a 400mm tele-lens was definitely not something I had found in the initial program).

In the end, I have found deep pleasure to being in a country so far from my own culture, Nepal, which felt very attractive because you find there the colors of India with the fun of shooting pictures of people who accept the photographer, do not take poses nor hide, but who share many things with you. The back LCD screen of our digital photo cameras become an intense source of shared pleasure with children as well as adults.

But when you let your camera at your neck, it is also time for sharing with men and women very open if you know how to smile and how not to jump in. Walking alone (or in a group of 2 or 3) is even easier because there is nearly no violence and insecurity (inside and outside the cities, Nepalese people are never aggressive and will often try to exchange with you even when you do not have many words in common).