IE6 becomes Firefox 3.6 with the help of China

This week has seen a pretty exhilarating story develop in front of our Internet eyes. Started as a muddy conflict between Google and the People’s Republic of China, it turned into a Firefox marketing victory. Let me summarize it a bit.

In the beginning was Google which installed its servers in China in 2006. The “do no evil” company accepted the conditions of the government of the PRC and included heavy filtering and censoring of its search results (looking for Tienanmen will produce wildly different results in and out of China). But in January 2009, Google discovered that some hackers obtained some detailed information out of its own servers at this was targeting both American companies and Chinese political opponents or partisans of free speech in China. Subsequently, Google announced its intention of both lifting the censorship and leaving China.

What is still very unclear:

So, when such information appears in wide open channels of the world press, what happens? Most experts started commenting on the security loopholes in Internet Explorer 6 (and about Adobe PDF reader, too). Many people observed that Internet Explorer 6 is rather old and it is unfortunate that so many people still use it despite the known fact that it is a security liability when browsing the Internet. With such a rush, some very official people also asked for replacement of Internet Explorer (mainly v6) to be replaced with more modern browsers. Even representatives of the German, French and Australian governments asked their countries to replace Internet Explorer with something else. 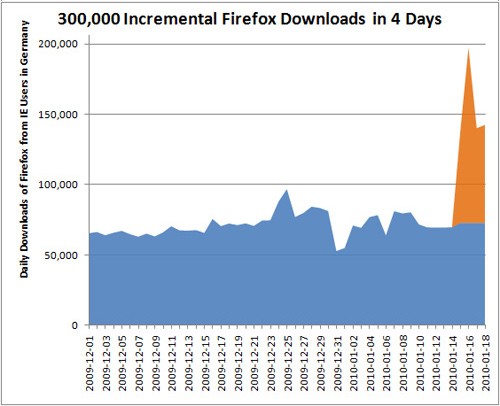 The competition has seen this as a godsend since it created a rush for the other available browsers. For example (see the graph on the side), Firefox saw a brutal explosion of its downloads in Germany (nearly 300,000 Germans have downloaded Firefox in four days): about three times more than usual. It has been true in other countries even if it was not measured as precisely, and it has been observed by the other browsers Opera, Safari, Chrome (currently profiting from heavy advertising in some European countries like France).

This was definitely a good thing since it was bringing better browsers to many computers. It could have stayed there but there were several reaction and parallel events happening at the same time. The first one was that Firefox was preparing a major upgrade to the successful browser (in many parts of the world Firefox is now used by more Internet users than Internet Explorer). Named v3.6, this new version is bigger than what could have been expected from its small number increase (from 3.5 to 3.6 should have been a minor upgrade). This major event accelerated the rush, with people looking for features like:

This version is also appreciated by developers who will find a bunch of little improvements (like CSS gradients).

This is not only a great story to read. This is a great browser and you should consider downloading Firefox 3.6 now!

If you are not completely convinced, you should also consider downloading the newest Opera browser. Opera v10.10 has been available for a few months now and it also offering these advantages, plus some neat features like:

Opera is clearly my preferred browsing solution (even if I need to test my web sites on everything I can find, Opera is the central hub of my Internet browsing). Go and download Opera v10.10 now.

And, if you are not sure yet, I can also offer the small and fast browser from Google: Chrome. Since it all started around Google and China, it was worth mentioning, of course.

All this has been going so fast that Microsoft needed to do something. Of course, they have a newer version of Internet Explorer (IE8 is included in Windows 7 and can be downloaded freely. But this was not enough, too many people were starting to complain that Microsoft may wait about a month before updating IE6 in the normal update cycle. Even worse, some experts started telling the world that Microsoft actually was aware of this flaw in IE6 for many months. In such conditions, not doing anything usually turns out to produce a public relations nightmare and prepares for bad wind.

So, Microsoft rushed an out-of-band update to IE6 and Windows Update is now offering the correction to all Windows users still using IE6 (of course, you still have to use Windows Update and it is well known that too many people do not have this configured or do not accept the proposed updates – this is wrong and one the reasons so many PCs are infected with Trojan horses, virus and adwares). Now, if you did not move to a later Windows version and if you did not take advantage of the much better IE7 or IE8, it’s time to upgrade your old hag.

We can expect to see a few more updates to this story in the future, but there is a lesson to be learned (by Google, and most Internet users):

Always keep your browser up-to-date and refrain from clicking on any link in a mail message you did not expect.

Additionally, there is a lesson for Microsoft:

Sorry! but even the older software has to be kept alive when you are or have been the near-monopoly on this technology. This comes with responsibilities.

← Cygnus for Windows 7
Scan a book like a pro →