Surprise! You can find color in B&W photos 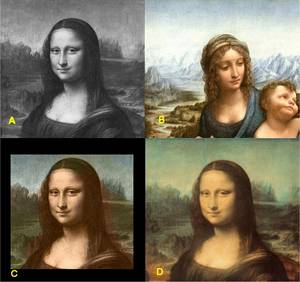 This is easy to reduce a color photo to a B&W image (any photo software or any B&W photocopier can do it). But the reverse operation seems difficult at best, impossible in most cases. However, a team of French scientists from the French INRIA (Guillaume Charpiat, Matthias Hofmann et Bernhard Schölkopf) presented recently an algorithm that succeeds to rebuild the color information from a B&W photo. And with some success.

On the image on the left, Leonardo Da Vinci’s Mona Lisa has been converted to black and white (A), using color data and textures from a similar image (B), the algorithm built a color image again (C) not too far from the original (D).

Analyzing this work, I’d say that part of the differences between the result (C) and the original (D) come from the quality of the conversion to Black & White which led to an image quite hard (a bit more contrast than needed).

Impressive result on photos, you can expect to see it applied to moving images (and movies).